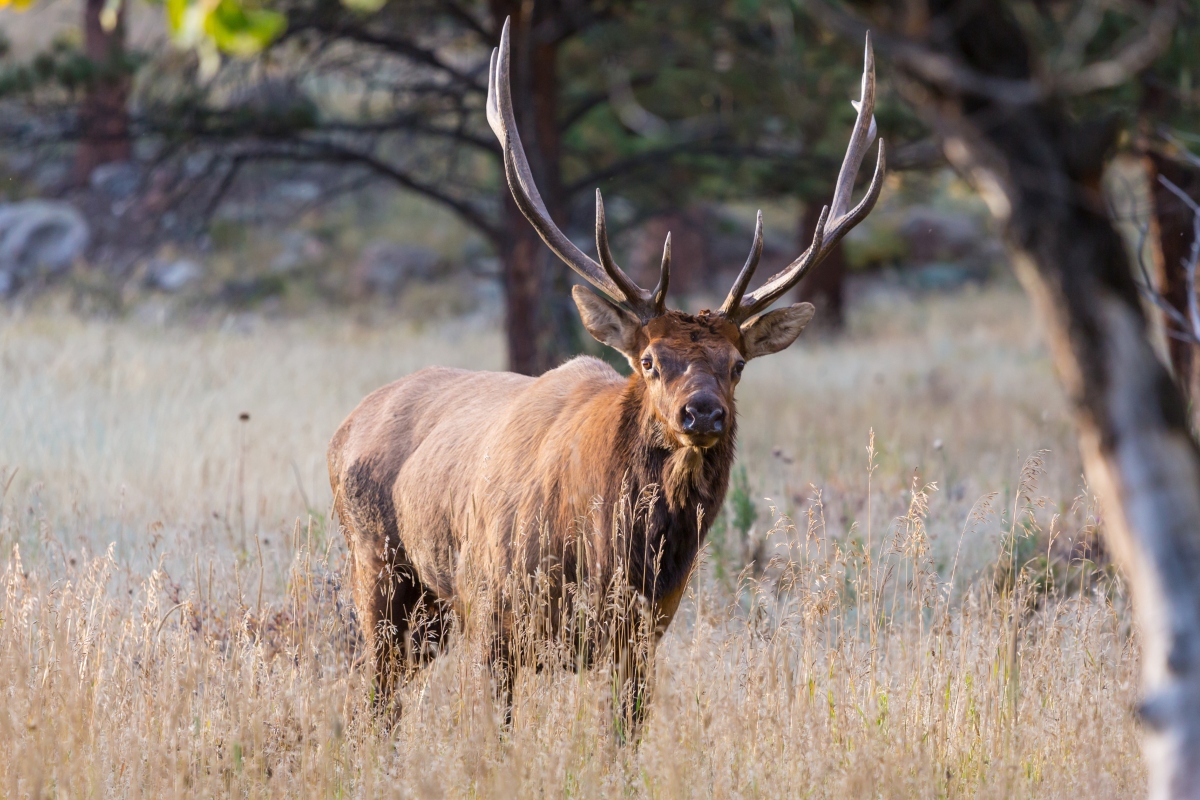 Researchers and local authorities frequently call upon veterinarians and animal control agents to help capture wild animals unharmed, to relocate animals unharmed in the course of their work, and to safely release animals from traps. It is therefore important for these parties and support staff to be familiar with animal handling and immobilization techniques.

Most wild animals will act defensively when cornered or restrained in any kind of a trap. They may simply try to escape, but as a trapper approaches and crosses the animal’s threshold of tolerance, most animals will become aggressive and bite or claw the prospective handler. An animal’s threshold of tolerance refers to the point at which a trapped animal will become aggressive upon human approach.1

It is a common practice that non-sedated, physically restrained animals have their heads or their eyes covered. This can actually help to calm them, since it reduces disturbing visual stimuli. Animals that need to be held for some period should be given a quiet, dark holding area. This should only be large enough for the animal to move around in; if the animal has too much room, it can hurt itself or others.

Certain equipment is ubiquitous in the practice of wildlife veterinarians and animal control agents. Among these are protective gloves, which are made from thick layers of leather with mesh in between, or with metal reinforcement at appropriate locations. Catchpoles are essential for letting carnivores out of traps, as these will often try to deliver a last warning bite as they flee. Restrained animals may be so frantic that biting is an almost involuntary reaction.1

Large, difficult-to-handle animals often need to be sedated for capture or transfer. Chemical immobilants may be delivered by hand to a restrained animal by using a pole syringe, or by using a capture gun (either a handgun or along gun). Capture guns are fired by CO2 gas cartridges or with .22 caliber blanks. Syringes (often called darts) are loaded through a breech, one shot at a time. The effective range may be up to 60 yards.1

In the U.S., the possession and use of drugs used to capture wildlife is governed by both federal and state regulations. All drugs currently used to sedate or immobilize wild animals are prescription drugs and must be used by or on the order of a licensed veterinarian. To comply with this regulation, non-veterinarians should ensure a valid veterinarian-client-patient relationship exists. This requires a veterinarian must be involved in the process, but it does not necessarily mandate that a veterinarian be on site during the immobilization process. Non-veterinarians using prescription drugs should receive adequate training. Some drugs used on wildlife are also classified as controlled drugs. Possession of controlled drugs requires a Drug Enforcement Agency registration number, special record keeping, and special storage requirements.2

Paralytic Drugs: The neuromuscular blocking (NMB) or paralytic drugs are some of the earliest drugs used for the chemical immobilization of wildlife. Despite their long history of use, NMB drugs are generally inferior to modern drugs. There are two major deficiencies of NMB drugs. One is that NMB drugs have a very low safety margin and dosage errors of only 10% can result in either no effect (underdosing) or death by asphyxia (overdosing). Mortality rates as high as 70% have occurred.

The second deficiency is that NMB drugs are virtually devoid of central nervous system effects because of their inability to cross the blood-brain barrier. Thus, an animal paralyzed with NMB drugs is conscious, aware of its surroundings, fully sensory, and, as such, can feel pain and experience psychogenic stress yet is physically unable to react. Because of these deficiencies, NMB drugs should be used judiciously.

Tranquilizers/Sedatives: Tranquilizers are used primarily in wildlife immobilization as adjuncts to primary anesthetics (e.g., ketamine, carfentanil) to hasten and smooth induction and recovery and to reduce the amount of the primary agent required to achieve immobilization. Valium is used primarily for small mammals as an anticonvulsant adjunct to ketamine anesthesia and it is also an excellent muscle relaxant. The alpha-adrenergic tranquilizers (e.g., xylazine or Rompun, medetomidine) are potent sedatives and can be completely antagonized. They are often combined with ketamine, Telazol, or carfentanil. By themselves, they are capable of heavily sedating animals, particularly ungulates, to the point of relatively safe handling. However, animals sedated with these tranquilizers generally can be aroused with stimulation and are capable of directed attack. Caution should always be exercised in such animals even though they appear harmless. 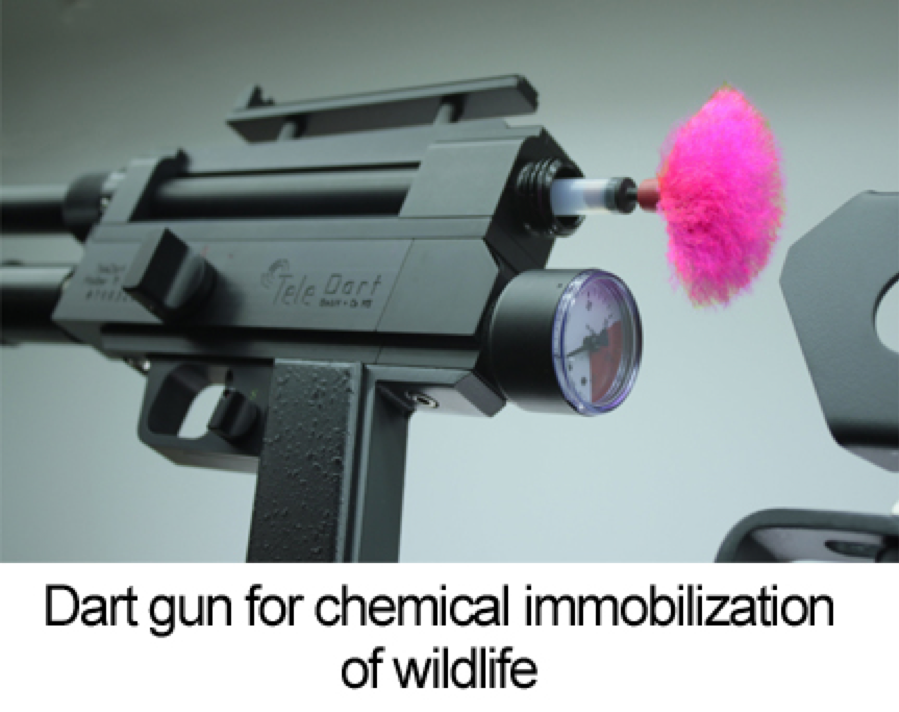 Dissociative Anesthetics: This group of drugs (ketamine, tiletamine) are characterized by producing a cataleptic state (a malleable rigidity of the limbs) in which the eyes remain open with intact corneal and light reflexes. Ketamine is probably one of the most widely used drugs for wildlife immobilization because of its efficacy and safety. Tiletamine is unavailable as a single product and it is combined in equal proportions with the diazepinone tranquilizer, zolazepam (e.g., Telazol).When used singly, ketamine usually cause rough inductions and recoveries, and convulsions are not uncommon. Because of this, they are usually administered concurrently with tranquilizers or sedatives. There is no complete antagonist for ketamine or Telazol.

Opioid Anesthetics: The opioids have been used for animal immobilization since the 1960s and are the most potent drugs available for this purpose. The most commonly used opioid is carfentanil. A3080 is a new synthetic opioid not yet on the market, but early trials on ungulates are promising. A major advantage in the use of opioids is the availability of specific antagonists.

The potency of opioids, such as etorphine and carfentanil, is both an advantage and disadvantage. The advantage is the reduced volume of drug required for immobilization makes them the only class of drugs capable of remote immobilization of large animals. The disadvantage is that they are potentially toxic to humans. Death is almost always due to respiratory failure. Opioid immobilizing agents should never be used while working alone or without having an antagonist immediately on hand.2