Hypothermia and Hyperthermia in Bactrian Camels During Chemical Immobilization

Hypothermia and Hyperthermia in Bactrian Camels During Chemical Immobilization 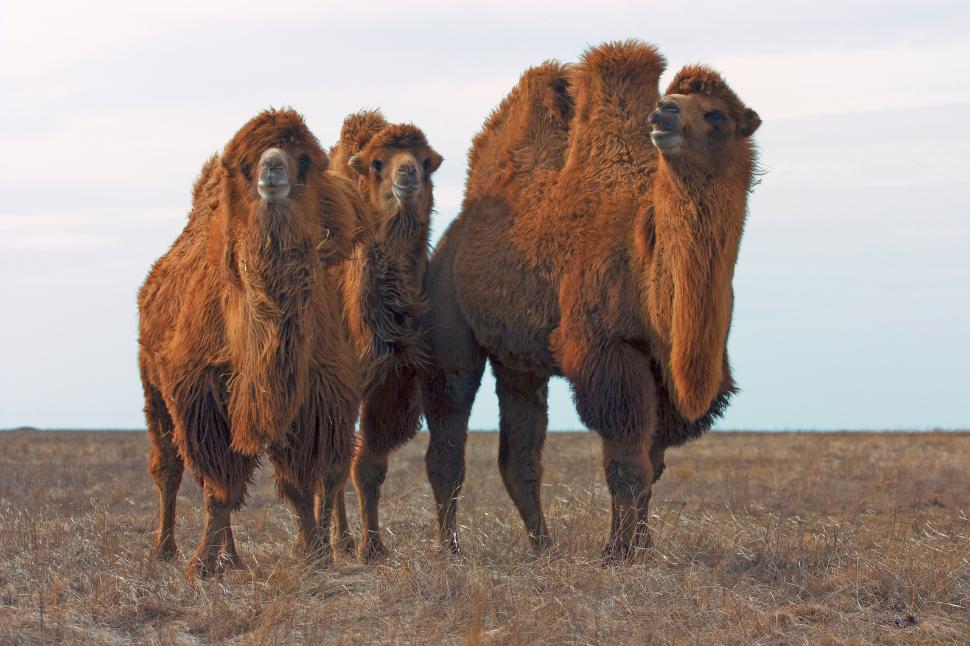 Few animals are as iconic as the camel. There are two main species of camel that are recognized; the Bactrian camel (Camelus bactrianus), and the dromedary camel (Camelus dromedarius). Both species are large animals with an average height of 6-1/2 feet high at the hump. Male Bactrian and dromedary camels weigh in at between 900 to 1,400 pounds, while females are about 10% smaller and lighter. 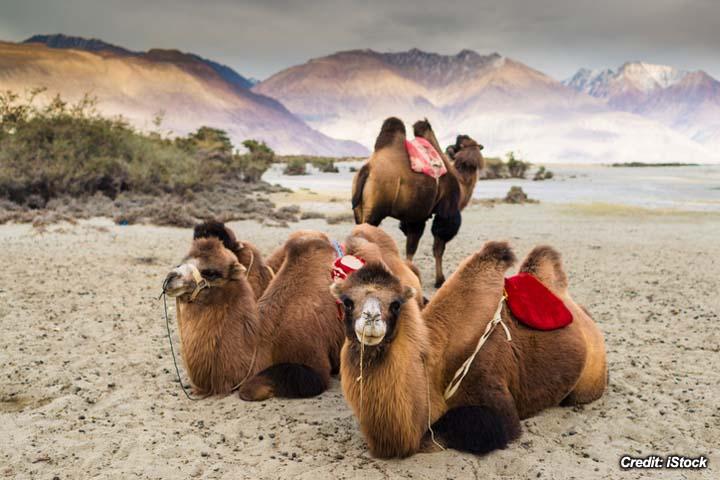 Since camels can carry more weight than horses or donkeys, need less water and are able to thrive on tough desert plants, they have been long valued as pack animals. Camels were used extensively to carry cargo on the Silk Road, the network of routes used by traders between Europe and Asia for many centuries. Dromedary camels were used primarily on western Silk Road routes, while Bactrian camels were used in the colder areas of Central Asia, Mongolia and China.2

Bactrian camels have longer hair than dromedary camels; their coats are thicker and heavier on the head, neck, humps, forelegs, and tail regions. Seasonal temperature changes in their ranges require Bactrian camels to shed their heavy coats when the seasons change.1 Bactrian camels have a double row of long eyelashes that block harsh winds that can blow sand and dust into the camels' eyes. Their ears are also lined with hair and their top lip is divided to aid in foraging in harsh conditions. Their nostrils can be closed to shield against dust and sand.

All camels are camelids, the family that includes camels, alpacas and llamas. They are members of the biological family Camelidae, and the only family in the suborder Tylopoda.1 While camels are ruminants like cattle, they differ from other ruminants in a few significant ways:

Wild Bactrian camels live in herds of about 6-20 animals, although they can occasionally aggregate in groups of many more. Herds typically consist of one alpha adult male leading adult females and their calves. The Bactrian camel's breeding season takes place in March and April. Calves are born weighing about 37 kg and are fully mobile within the first 24 hours. Calves in the wild are typically weaned within the first two years.1

Bactrian camels are not territorial; sometimes, multiple herds will cross paths and form a larger herd which can reach up to 500 individuals. Herds spend the majority of their days migrating and grazing. During the winter months, wild Bactrian camels migrate to the Gobi desert steppe, returning to the desert when the snow melts in the spring.

Even considering the high level of domestication of most camels and their agreeable nature when it comes to handling, their capture can be a stressful event which has the potential to cause capture-induced hypothermia or hyperthermia. Either of these complications can result in morbidity or mortality. The severity of the capture-induced hyperthermia has been associated with the likelihood of organ damage, alterations in electrolyte balance (possibly leading to dehydration events), increased oxidative stress and death.4 It has also been called one of the primary indications for the development of capture myopathy, a potentially fatal complication of capture.

The mechanisms underlying the increase in body temperature during capture-induced hypothermia and hyperthermia are not fully understood, but the sympathetic stress response appears to be a factor. Even with animals engaging in low levels of activity during capture with mild ambient temperatures can develop severe hyperthermia.5

The normal temperature of a camel at rest varies from about 34°C to more than 40°C.7 Due to the harsh environments that camels occupy, they have evolved with a unique ability for thermoregulation. This is referred to as adaptive hypothermia, or an ability to cool their bodies to avoid hyperthermia. It has been observed that male dromedary camels in rut have cooler body temperatures in the beginning of the day, which may be a factor in reproductive success.8 It is not known if Bactrian camels display the same adaptation.

In summer, the camel’s daytime body temperature variations when deprived of drinking water may exceed 6°C, but in animals with access to water, the variations are similar to those found during other seasons.7 These wide variations in temperature are tolerated by the camel, whereas in other animals, if body temperatures exceed more than 2 to 3 degrees higher than lower than the norm during an immobilization event, there is significant cause for concern.

Measuring body temperature should always be standard procedure during all anesthetic events involving camels. While hypothermia is more common in small animals because of the large surface area-to-volume ratio, instances of both hypothermia and hyperthermia have both been reported during the capture of camels. Some of the drugs used in chemical immobilization are known to suppress normal thermoregulatory mechanisms, thereby potentially causing hypothermia or hyperthermia. Hyperthermia however, is also common immediately after the immobilization of both captive and free-ranging hoofstock due to excitement and struggling after being darted.9-10

Intubation has been widely recommended for any anesthetized camel that needs to be transported or anesthetized for greater than twenty minutes,4 and monitoring core body temperature is essential in camel anesthesia.9 Until the more recent use of formulated drugs (e.g., combinations of α2-agonists such as medetomidine, detomidine, xylazine and their reversal agents), opioids were the mainstay of camel anesthesia in wildlife and captive care.10 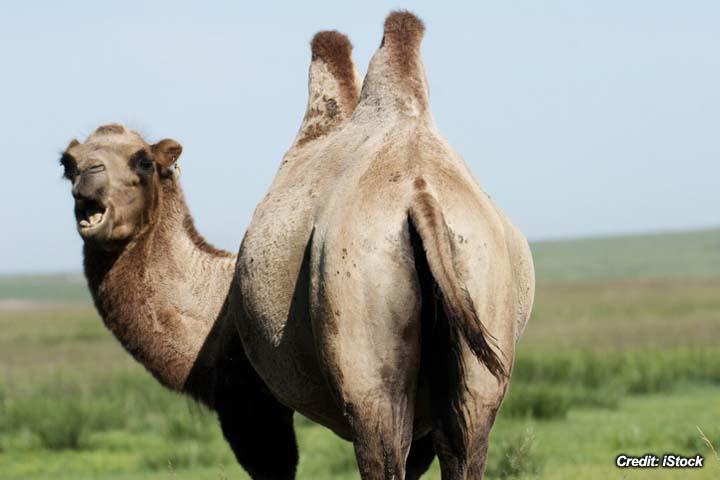 Physically cooling captured animals is one method that is widely recommended for improving their chances for survival during chemical immobilization. Thus, handlers in the field should be prepared for this contingency and have the proper equipment on hand. Physical cooling has been known to be highly effective even when capture-induced hyperthermia in a camel is severe.

Recommendations for cooling captured camels include placing the animals in the shade and dousing them with water using portable mist sprayers, followed by rapid intravenous (IV) fluid therapy.9 In animals with body temperatures greater than 41°C, the use of cold water enemas and intravenous infusion of cold Ringer’s lactate has been recommended.10

Ice packs have also been reported to restore the body temperature of hyperthermic animals to pre-capture levels.9 Since carrying water is far less cumbersome and difficult than transporting and maintaining ice-packs in the field however, the literature recommends that water-dousing is the most practical and effective first intervention for cooling an camel with capture-induced hyperthermia.

In the case of wild Bactrian camels, hypothermia may be of greater concern (than in domesticated Bactrian camels or dromedary camels) due to the fact that temperatures can fall to far lower extremes across their range, particularly during the winter months.

In addition to abnormally low body temperature, signs of hypothermia in Bactrian camels can include:

With mild hypothermia, shivering may be the only outward symptom. As hypothermia increases in severity, some of the other listed symptoms can become evident. The camel’s vital signs are likely to become increasingly erratic as its body goes into heat conservation mode.9 At this juncture, its body is trying to keep its vital organs from shutting down by restricting the blood flow from other parts of the body.

Water bottles filled with warm water and placed around the camel’s body can be used to reverse hypothermia. External heating devices may also be used, although some of the literature states that heating pads should be used with care, as it is easy to burn an animal’s skin.10 Returning the camel to a warm environment (if possible) and/or using heat lamps (if available) can also be helpful.

6Schmidt-Nielsen, K., et. al. Body Temperature of the Camel and Its Relation to Water Economy. American Journal of Physiology. 31 Dec 1956.