Gastric ulcers (or gastroduodenal ulcer disease) in dogs are lesions that form in the lining of the stomach or upper gastrointestinal tract. These occur when the surface layer (mucosal barrier) that lines the stomach becomes compromised. Many disease states and toxins can lead to these focal lesions, which are characterized by the disintegration of the superficial tissues.1

The mucosal barrier in the stomach and GI tract provides a complex mechanism of defense against the variety of substances that typically find their way into a dog’s stomach and the highly acidic environment required to help break down food. Amazingly, this mechanism is able to handle inert objects, certain toxins and even infectious materials because its ability to secrete mucus on an “as-needed” basis helps to protect the lining of the GI tract from a wide variety of potential damage. 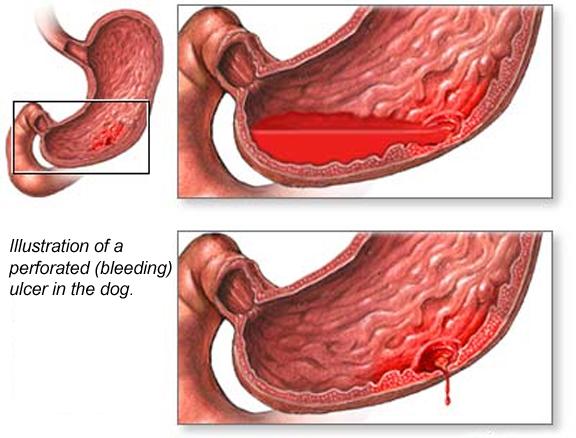 If this barrier is breached by injury, disease or certain medications however, the results can be quite serious. Continuous damage driven by the caustic environment in the GI tract and the body’s own inflammatory mechanisms creates a self-perpetuating cycle of continuous damage. Should an ulcer in the GI tract become perforated, a life-threatening loss of blood can arise.

Causes of Ulcers in Dogs

In the dog, drugs such as Nonsteroidal anti-inflammatory drugs (NSAIDs), liver disease and cancer are the most common causes of gastrointestinal ulcers.2 Other maladies that can give rise to ulcers include kidney disease, Addison’s disease, anxiety disorders, primary gastrointestinal diseases (such as inflammatory bowel disease and gastric dilatation volvulus), shock and sepsis.1 Extreme exercise has also been associated with gastric ulceration, particularly among sled dogs.3

Symptoms and Diagnosis of GI Ulcers in Dogs

In the dog, the most common observable signs related to gastric ulceration include:

In extreme cases, the more severe symptoms of ulcers in a dog can include:

Unfortunately, some dogs with GI ulceration do not display any clinical signs. In cases of severe ulceration (particularly if perforation has occurred), the dog may present with signs of pain, weakness, pallor, and shock.

A diagnosis of gastric ulceration is often derived from clinical signs and laboratory confirmation of blood in the stool, but it can be definitively diagnosed through endoscopy. A complete blood count, serum chemistry analysis and urinalysis are typically used to differentiate primary gastrointestinal disease from other causes. These methods can also help to identify or rule out secondary problems (comorbidities). Occasionally, the veterinarian may recommend additional tests, such as liver function testing. 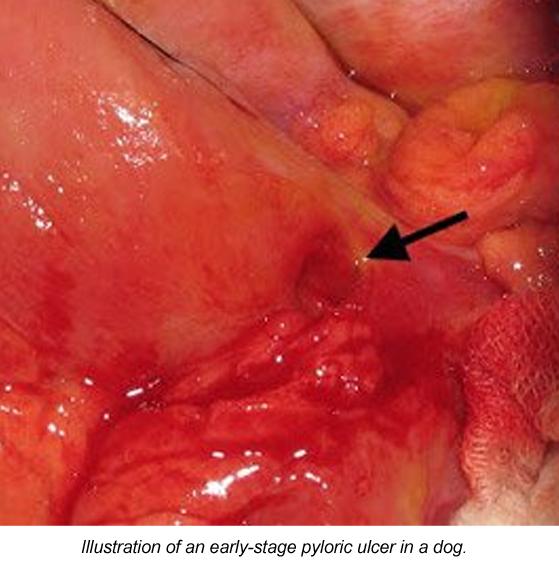 Treatment of Gastrointestinal Ulcers in the Dog

Treatment for gastroduodenal ulcers can vary. If the case is not serious, the veterinarian may recommend such things as antacids and environmental and dietary changes. More often, medications called gastroprotectants are used to help reduce gastric acid production, alleviate inflammation and reduce pain.1 Treatment of the underlying cause(s), if identified, is crucial to the long-term success of gastric ulcer therapy.

Dogs suffering from dehydration due to vomiting or diarrhea may be prescribed intravenous fluids to restore hydration and electrolytes. If a bacterial cause of the ulcers has been identified, the veterinarian will generally prescribe antibiotics. Occasionally, natural remedies have been used in the treatment of GI ulcers in dogs. These include herbals such as licorice root, aloe vera, slippery elm, echinacea, and alfalfa. Supplements such as L-glutamine and quercetine can also strengthen the immune system and are believed to prevent new ulcers from forming. It is advisable to consult your veterinarian prior to putting a dog with ulcers on any treatment regimen. Emergency surgery may be indicated in cases of a perforated ulcer.

Sucralfate is a GI-mucosal protectant that is used to treat oral, esophageal, gastric, and duodenal ulcers and to prevent drug-induced gastric erosions.3 Originally developed as an adjunctive treatment for stomach ulcers in humans, sucralfate is a sucrose aluminum hydroxide compound that forms a gel-like webbing over ulcerated or eroded tissues, thus serving as a sort of a bandage. It is most effective in the stomach, duodenum and esophagus.4

Although the exact mechanism of action of sucralfate as an antiulcer agent is unknown, it appears to have a local effect, rather than a systemic one. After oral administration, sucralfate may react with hydrochloric acid in the stomach to form the aforementioned paste-like complex that preferentially binds to the proteinaceous exudates that are generally found at ulcer sites (eg, albumin, fibrinogen). Sucralfate may have some cytoprotective effects, possibly by stimulation of prostaglandin E2 and I2.3 It also has antacid activity, and is believed to bind to intact GI mucosa to form a protective layer.

Because sucralfate is a locally-acting medication that is not absorbed into the body, it carries very limited potential for side effects. Approximately 2% of humans and dogs taking sucralfate will experience constipation as a side effect.3

The following medications bind to sucralfate; their efficacy will be lessened if sucralfate is present:

Sucralfate is contraindicated in patients with known hypersensitivity to the drug. Because it may cause constipation, it should be used with caution in animals in which decreased GI transit times might be deleterious.

Sucralfate is available in liquid, paste and tablet forms. A dose of sucralfate lasts approximately 6 hours after it is taken orally. It is best if not given with food or separated from food by at least an hour.3

As a GI-mucosal protectant for conditions such as esophagitis, gastric or duodenal ulcers, and uremic gastritis, Plumb’s Veterinary Drugs recommends 250 – 500 mg of sucralfate for toy-breed dogs and cats, and 1g PO two to four times a day for large dogs. Tablets may be crushed and suspended in water or compounded in a suspension as long as the preparation is used within 14 days.